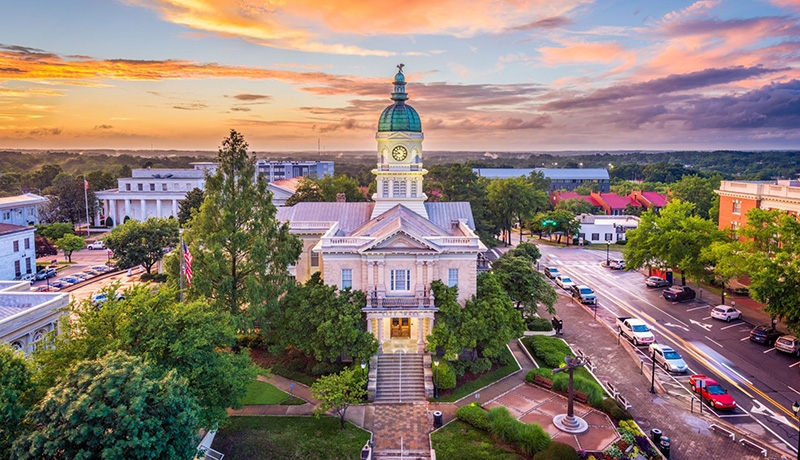 The Athens-Clarke County metropolitan area serves as an employment, cultural, educational and business center for surrounding counties and all of Northeast Georgia. Easily accessible from US-441, US-78 and GA-316, with Hartsfield-Jackson International Airport only 80 miles away. Located 20 miles from I-85 and 30 miles from I-20, Athens affords easy access to the City of Atlanta and the port of Savannah, and the Athens’ own Ben Epps Airport is a mere three miles from the heart of downtown. CSX and Norfolk Southern provide freight service in and out of Athens, with lines running directly to the Athena Industrial Park. Long marked on the map as a center for the arts, learning and cuisine; a music capital; and home to the University of Georgia and Athens Tech, Athens is also noted for a rich manufacturing history and a strong industrial base. From food processing to pharmaceuticals, to plastics and now Caterpillar bulldozers, numerous manufacturers have flourished in Athens-Clarke County for many years. Boasting a diverse business mix, Athens is home to major Fortune 500 companies and local entrepreneurial startups alike.

The vibrant college town of Athens, Georgia is known for its unique blend of traditional heritage and trend-setting Southern culture. Home to the University of Georgia, America’s first state-chartered college, Athens and the University have grown together over the past two centuries and developed a distinctly urbane academic and artistic culture.  Numerous art galleries are filled with works from local artists, and the Georgia Museum of Art hosts traveling exhibitions. The State Botanical Garden of Georgia is one of many public gardens that capture nature’s beauty in Athens, home to America’s first garden club. Guided and self-guided tours of 15 historic districts and four house museums representing a range of architectural styles provide a glimpse into the past. Athens is a notable stop on Georgia’s Antebellum Trail, both for the extent of antebellum architecture that was spared Sherman’s March to the Sea and for the number of Confederate leaders who had homes in this area. Athens’ downtown has been designated a historic district, and the restored Victorian-era buildings remain as vital as ever, housing an eclectic mix of restaurants, retail shops, art galleries, professional offices, living space, and world-renowned music clubs.  The vibe and creative energy that gave birth to R.E.M and the B-52’s are alive and well today! Susan Chatham Bogardus is a First Vice President and Commercial Lender with First American Bank and Trust. She has been with the bank for over 11 years and has been in banking in Athens for 30 years. She is a graduate of the University of Georgia. Susan is active in several civic and community organizations including serving as an active member of the Athens-Clarke County Vision Committee, Housing and Demographics Research Center Board, Athens Area Association of Realtors and the Athens Area Home Builders Association. Susan was an Athena Award nominee in 2011 and participated in the 2015 Dancing with the Athens Stars for Project Safe. Susan recently received the Community Involvement Award from First American Bank for her work in the Athens
community, as she often does community programs on credit, budgeting and banking at the schools and for other groups on a volunteer basis. Individual to be Named